crosspost tokvil.Be - we have a Federal Government !

There is a Government, a Belgian government.

After a quick read of the governmental declaration , here what I have found that is relevant for the digital and societal transition.
The transition can be found in different aspects:
- the public services reform and need to become more horizontal and digital; a focus on health and justice
- ecological transition
- democratic transition with increased forms of citizen involvement
- openess to new forms of organisation like cooperativ es, entreprise libérée
1. public services
the COVID19 was an eyeopener it seems on the inadequacy of the organisation of public services. An important chapter looks at health and social security reform that I will not detail here.
In terms of administrative improvements, a serious effor will take place to rationalise administative structures (fusion, work on horizontal alignment, new budgets,...)
The word 'hackaton' is used to look at ways to improve health services.
The government (note : finally) realises that a unique citizen box above the different competentences is of interest (note: he Brussels irisbox, Federal box, Flemish box,...). other efforts in further digitalisation also of public services.
On the digital part, there is talk of incubators, initiatives on #govtech under the umbrella #digitalbelgium
And telework 2 days per week seem to be the administrative norm; with impact on real estate.
2. ecological transition
A relaunch plan will be organised ; it involves a transormation fund that will enable transition to low carbon and zero emission. A strong link with the European Green deal.
Circular economy is integrated both in its material aspects as organisational (from linear to circular)
SDGs are mentioned, but only in the chapter international coordination, a missed opportunity.
3. Democratic transition
More citizen participation in the form of mixed parliament - citizen groups, will be organised.
And on a side note happy to see that voting will be possible voluntarily from 16 years on (for EU elections).
4. new forms of organisation
Interest in cooperatives and forms of companies like 'entreprise libérée'; not very concrete, but seems to have been important for a political party as it reached the end note.
5. and the WTF award goes to the public company Bpost: they are asked to make an effort to innovate.
All in all a quite sober governmental declaration, where the reality of the covid crisis, ecological crisis, and governmental gridlock, are deeply entrenched into a program, that would have looked completely differnt 6 months ago. in this sense it is a governmental declaration, in line with current issues.
These and other topics to be discussed during upcoming TOKVIL.BE public innovation lab launch 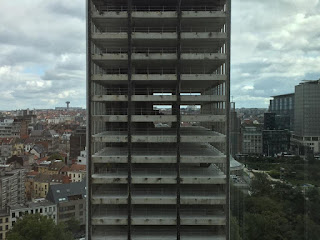