I picked up the doughnut economics book at the airport of Copenhagen a few years ago. 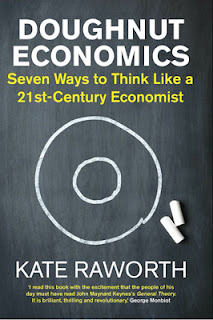 It took me some time to understand and digest the reading.  Basically Kate Raworth is showing that the underlying assumptions of our current economic models based on growth are flawed.

Instead she refers to an economy that needs to develop within the borders of human dignity (inner circle) and planetary boundaries (outer circle); Tha'ts how she came up with the model dubbed doughnut economics. 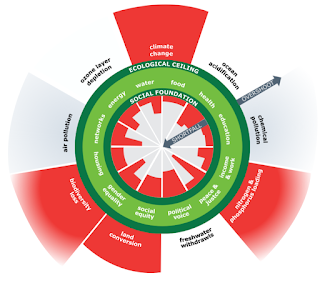 There is a link with SDGS, but the basic change is SDG8, where Kate refutes the word growth as it has been eating up the planet multiple times and has put strain on human dignity.

Some innovative cities have started last year to work with her team, to start introducing the donut principles in their own city, eg Amsterdam.  This donut coalition so far focuses on citizen involvement and looks at moving local economy from a linear to a circular one.  The complete model is explained here

I have witnessed the forces at work in Amsterdam, and the model seems a real powerfull one, in terms of empowerment etc.

The Brussels Governement, and state secretary of economic transition in Brussels B. Tracht, announced that they would start working in a similar donut coalition in Brussels.  Organisation confluence is the driving force behind it, together with ICHEC.  Looking forward which forces will be used in Brussels to work on this donut model.  A lot of initiatives exist like becircular.brussels, etc and of course the coronoa crisis provides an opportunity to move the cursor. Of course it needs to be an implementation that will empower Brussels actors, companies, citizens to go into a sustainable future.  Hopefully this project is the 'perspective' that so many actors are longing for.

- Company distrust of political toys and gimmics also, or entrenched in old paradigms

Note also that OXFAM (Kate R worked there) Belgium  has also created an important campaign around the donut, with interesting resources and interviews. that talk about the challenges of this model.

Looking forward to contribute as SDG actor, facilitator, citizen participant to this realisation.